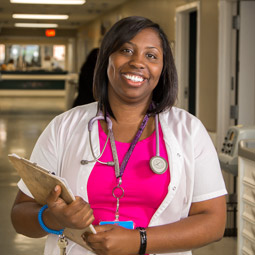 Grow your career at Signature HealthCARE! We are searching for dedicated and compassionate individuals to join our Nursing team! Congrats to our Speech student McKenna (WKU) for finishing her first externship!! We are so proud of you! Good luck with the remainder of your studies! We would like to congratulate Cindy Jackson, CNA on earning the August 2017 Stakeholder of the Month award at Signature HealthCARE of Portland!

Cindy was chosen by her peers after continuous and overwhelming remarks from families of how dedicated and caring Cindy is and how “she always takes great care of mom” as one family put it. Cindy works mainly on the Rehab-To-Home portion of the Home, and takes pride in the work she does for new Elders who come in, often alone, depressed, and some even wondering if they will ever make it back home. Cindy states she decided to be a CNA in 2006 because she “loved taking care of people.” Without CNAs like Cindy, our Home would not be what it is today. We are proud to announce that SHC of Portland has earned and maintained a 5/5 Star Ranking for Quality Measures for 9 consecutive months!

“What are Quality Measures all about, and why should they matter to me?” you might ask yourself. Below is a short description from the Centers for Medicare & Medicaid Services (“CMS”) website explaining: On June 12th, SHC of Portland was recognized by ATOM ALLIANCE, a regional Quality Improvement Organization (serving AL, MS, IN, KY, and TN), on earning a Certificate of Achievement for outstanding Quality Metrics. According to the report, SHC of Portland was 1 of the 94/310 Nursing Homes in Tennessee to achieve this quality benchmark. Furthermore, SHC of Portland sustained these benchmarks for 6 straight months!!
Atom Alliance is part of the Centers for Medicare and Medicaid (“CMS”) quality initiative to improve quality care in America’s Nursing Homes
SHC of Portland is a 112- Bed Skilled Nursing & Comprehensive Rehabilitation Facility located in Portland, TN. For Admission information or bed availability, please call McKenly Blair at 615.325.9263 Please help us congratulate Kim White, Assistant Business Office Manager, as the June 2017 Stakeholder of the Month. The 2016 Signature Hall Of Fame inductee is a ‘jack of all trades’ for the Home, providing support in the Business Office, Admissions, Dietary, Accounts Payable & Receivables, just to name a few. Kim has dedicated her professional life to our Home in various capacities over her 23 year tenure, and has passed the torch to her daughter, who is also an avid Volunteer at the Home. Kim’s coworkers describe her as the unsung support member of our operation; she is the one whose work keeps the day to day operations of the Home afloat and successful! CONGRATULATIONS KIM!

Signature HealthCARE of Portland (Portland, TN) held its grand opening for Ralph’s Country Store this past Friday, May 19th 2017. Ralph’s Country Store was named in honor of the long-time Portland, TN Physician Ralph Ruckle, who has served as a practicing physician at SHC of Portland for 40+ years. This resident-operated store used to serve as the Human Resource office and, with the help of facility staff headed up by Maintenance Director Terry Canter and Assistant Alex Cox, the old office space has now been revitalized into a community gathering place for the whole Home. General Stores and other Community gathering places are slowly being adopted and integrated into Long-Term Care Homes to improve the atmosphere for both Elders and Stakeholders. The Elder feels more empowered and able to make choices for themselves, as well as feel like they are less isolated from the outside community.

Ralph’s Country Store is opened to the public, families, and elders and has mostly all of the amenities that a country store traditionally has: cold drinks, coffee, snacks, ice cream, and a store associate whom happens to be an Elder at our Home! Anita Bullington, SHC of Portland Elder and Elder Council President, will be the first Store Manager in the store’s history, a role that she is very familiar with. Before her recent health issues, Ms. Anita worked at several country stores and restaurants in Sumner County, including Bullington’s Market in nearby Siloam, TN which was owned by her brother. Ms. Anita moved in our Home in December2016 from Sumner Regional Medical Center. Ms. Anita was at another Nursing Home prior to being hospitalized, but claims that she would have never got an opportunity like this to run a Country Store at the previous Nursing Home, and the atmosphere at SHC of Portland has really kept her spirits up.